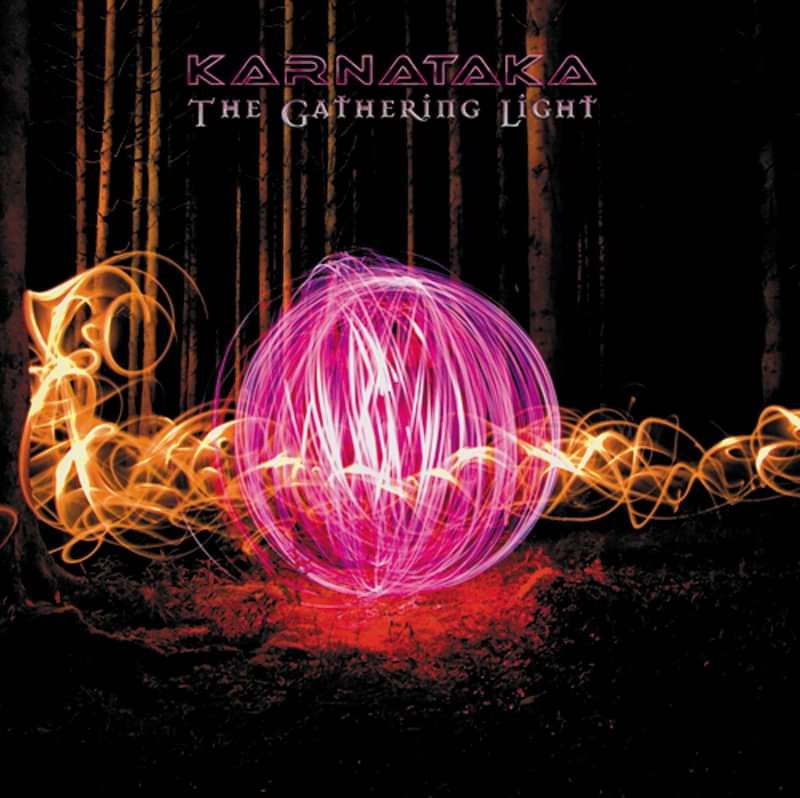 From powerful to ethereal, breathtaking to haunting, Karnataka's music draws upon many influences from melodic, classic and progressive rock to dramatic celtic cinematic soundscapes, all fused into a unique, dynamic sound that is undeniably Karnataka's own.

The Gathering Light is the stunning, much anticipated new work from Karnataka and their most ambitious to date. Dealing with loss, isolation, love and ultimately hope - this is a powerful, uplifting musical experience that takes the listener on a never to be forgotten musical and emotional journey into The Gathering Light.

Back in 2001 I discovered the wonderful music of Karnataka. It was when their second album The Storm was released and got raving reviews. I was probably one of the first people in the Netherlands that did an interview with them when they were a support act for Porcupine Tree. At the time I wrote that the band fuses the best aspects of Celtic folk, poprock and progressive rock. Their follow up album Delicate Flame Of Desire came out in 2003 and was a very strong album and loved by a lot of people. They moved even more towards to boundaries of progressive rock. We heard an impression of how they sounded on stage during the tour of this fantastic third release on the double CD Strange Behaviour. Just after I had written a very positive review of this fine live collection some strange news reached me. I was totally devastated when they told me that the band was no more. A very weird split up had taken place, as far as I could tell. Later on it became clear that personal reasons had been the real reason for the break up. Too bad at the time, because I was really looking forward to see this great live band in action, but it was not possible anymore.

And then suddenly out of the blue the news arrived that the band had got together again. The musician behind the resurrection of Karnataka was one of their founding members Ian Jones (bass, guitar, keyboards etc.). As the only person that played on all other Karnataka releases he started the search for the best musicians possible to build a new formation of Karnataka. Musicians came and went several times before the final line-up was ready to start the recordings of a new album. At a very early stage the album got the title The Gathering Light.

When you finally hear the almost 70 minutes of music made by the band and several guest musicians, you realize that it was certainly worth waiting for all those years. Ian and his fellow musicians created something really special of a very high level. A level which I had not heard on any Karnataka releases before. I discovered no weak tracks on The Gathering Light and the musicianship is unbelievably high. Therefore I can tell that the band has made a true masterpiece with this album and is most certainly one of the highlights of 2010 so far.

The album starts very mellow with the short instrumental piece The Calling. You almost hear nothing and you turn the volume to a higher level to make sure you don’t miss anything. It’s just a great trick to hear the music of Karnataka very loud!!! The Uillean pipes from guest musician Troy Donockley dominate the track, together with some atmospheric keyboard sounds probably played by Gonzalo Carrera and Ian Jones himself. The uptempo piece State Of Grace is next. This track shows for the first time how strong the players are on their instruments. Most of all guitarist Enrico Pinna shows how brilliant he is. Also drummer Ian Harris almost never finds some rest in his arms. Wow! This is just how I like it! On this instrumental piece the band also includes some wonderful musical fragments that remind me of Yes and their song Awaken. It just sounds fantastic. Your World, the third track on the album, gives for the first time new female singer Lisa Fury a chance to shine in full glory. We can not compare Lisa to the former female singer Rachel Jones. Both voices are fabulous, but they don’t match at all. Lisa’s voice reminded me a lot of a singer that was known in the Netherlands a very long time ago with a track named Stay With Me Till Dawn. The wonderful Judy Tzuke. You might say that Your World and the next two tracks Moment In Time and The Serpent And The Sea have some pop influences. But it just suits the music very well to make the songs not too complex. However, the great guitar solo’s again make sure that the progressive rock influences rule on the entire album. They just make you dream away. Maybe the next song Forsaken can be labelled as one of my favourites on the album. The climax on this piece is just awesome and builds up to an incredible height thanks to the great drum rhythms. Some Arabian musical influences dominate Tide To Fall. In my mind I already picture lead singer Lisa Fury to move like a real belly dancer. The 14 minutes long title track is the perfect ending for this excellent comeback album. Once more we hear Troy Donockley, Hugh McDowell (cello) and a wonderful string quartet for the last time. For a moment I heard the wonderful music of Iona on this track. But the song has much more to offer and shows once again why I can only give the highest rating to this superb album.

The Gathering Light made by Karnataka is for me one of the first releases of 2010 that gets all the five stars that are available. They deserve it most certainly. Highly recommended to everybody who likes the older albums made by Karnataka, but also to those who like bands such as Yes, Genesis, Iona and Mostly Autumn.

After I already had written this review the news arrived that their fantastic drummer Ian Harris, keyboard player Gonzalo Carrera and the new voice of the band Lisa Fury had left the band in a friendly way. Adds for a new singer and keyboard player are already online and let’s hope that this chance of line-up will not effect the sound of the band. A sound that is so great on The Gathering Light. ***** Henri Strik (edited by Astrid de Ronde)