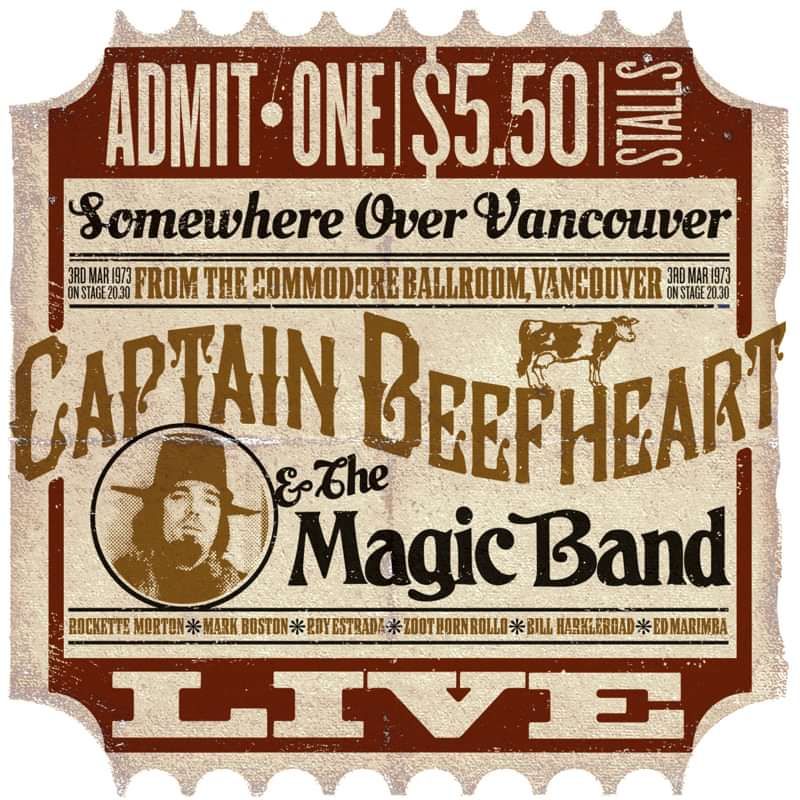 Don Van Vliet (born Don Glen Vliet; January 15, 1941 – December 17, 2010) was an American musician, singer-songwriter, artist and poet known by the stage name Captain Beefheart. His musical work was conducted with a rotating ensemble of musicians called the Magic Band (1965–1982), with whom he recorded 13 studio albums. Noted for his powerful singing voice with its wide range, Van Vliet also played the harmonica, saxophone and numerous other wind instruments. His music blended rock, blues and psychedelia with avant-garde and contemporary experimental composition. Beefheart was also known for exercising an almost dictatorial control over his supporting musicians, and for often constructing myths about his life.

During his teen years in Lancaster, California, Van Vliet developed an eclectic musical taste and formed ‘a mutually useful but volatile’ friendship with Frank Zappa, with whom he sporadically competed and collaborated. He began performing with his Captain Beefheart persona in 1964 and joined the original Magic Band line-up, initiated by Alexis Snouffer, in 1965. The group drew attention with their cover of Bo Diddley's Diddy Wah Diddy, which became a regional hit. It was followed by their acclaimed debut album Safe as Milk, released in 1967 on Buddah Records. After being dropped by two consecutive record labels, they signed to Zappa's Straight Records. As producer, Zappa granted Beefheart unrestrained artistic freedom in making 1969's Trout Mask Replica, which ranked 58th in Rolling Stone magazine's 2003 list of the 500 greatest albums of all time. In 1974, frustrated by lack of commercial success, he released two albums of more conventional rock music that were critically panned; this move, combined with not having been paid for a European tour, and years of enduring Beefheart's abusive behavior, led the entire band to quit. Beefheart eventually formed a new Magic Band with a group of younger musicians and regained contemporary approval through three final albums: Shiny Beast (Bat Chain Puller) (1978), Doc at the Radar Station (1980) and Ice Cream for Crow (1982)

Van Vliet has been described as ‘...one of modern music's true innovators’ with ‘...a singular body of work virtually unrivalled in its daring and fluid creativity.’ Although he achieved little commercial or mainstream critical success, he sustained a cult following as a ‘highly significant’ and ‘incalculable’ influence on an array of New Wave, punk, post-punk, experimental and alternative rock musicians. Known for his enigmatic personality and relationship with the public, Van Vliet made few public appearances after his retirement from music (and from his Beefheart persona) in 1982. He pursued a career in art, an interest that originated in his childhood talent for sculpture, and a venture that proved to be his most financially secure. His expressionist paintings and drawings command high prices, and have been exhibited in art galleries and museums across the world. Van Vliet died in 2010, having suffered from multiple sclerosis for many years.

This extraordinary record catches the Captain at his best; live on stage in 1973. Someone who was in the audience that night later wrote: “The Captain Beefheart show was beyond my expectations, it washed over us with a magic gumbo of free-jazz, swampy blues, avante garde squawking and punky insolence. We loved it. We didn't know what it was, but we loved it. Captain Beefheart was at least twice as old as most of us in the room, but that wasn't an issue, not in the least. It rocked our world.”