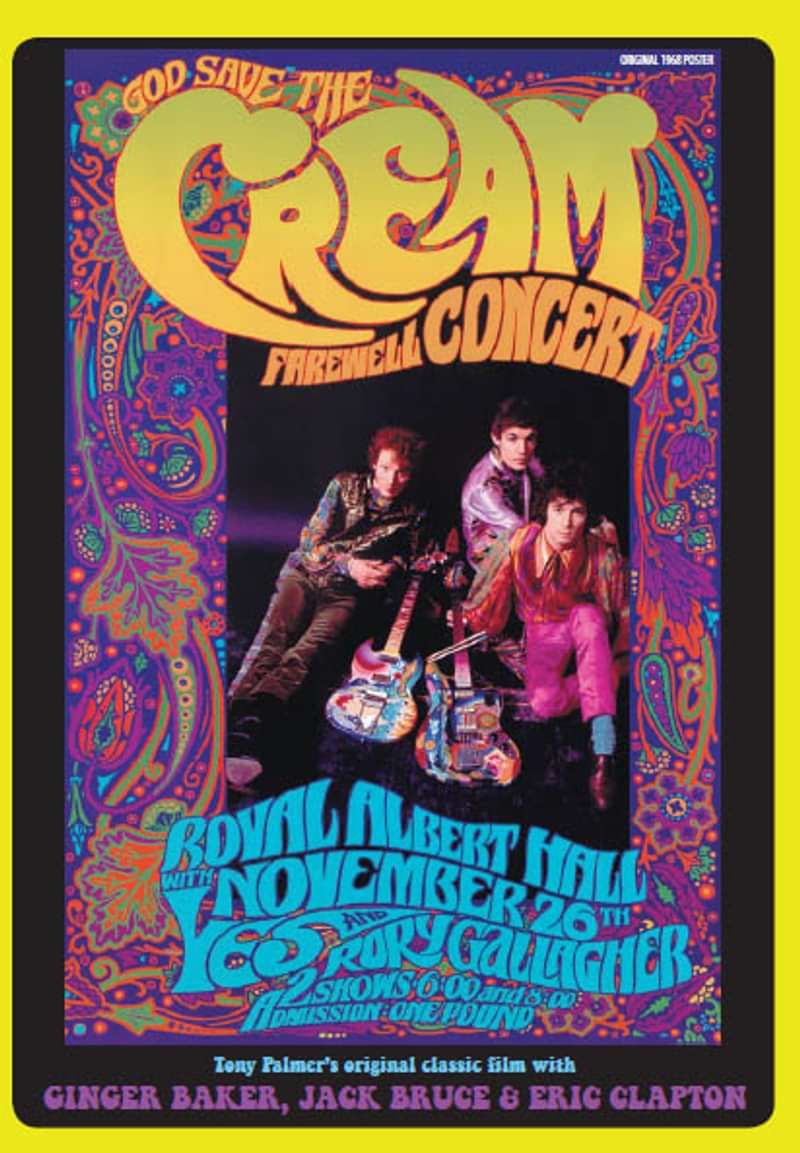 This was one of those occasions of which it can truly be said: those who were there, will never forget it. November 26th, 1968, at the Royal Albert Hall – it only seems like yesterday. And having looked at the film again, the concert really does seem as fresh and as pulsating as it was then. First, the musicians themselves. They above all others blew apart the myth that rock ‘n’ roll was music for the simpleminded, by the simple-minded. Maybe Dylan and Lennon had showed that lyrics could encompass subtle philosophical and poetic ideas. But it was Baker, Bruce and Clapton who demonstrated that harmonically and structurally what was dismissed as rock’n’roll could be every bit as complex as any contemporary, so-called classical, music. Each musician had a deep respect for the other two, although on the surface envy, even hatred, drove them on. None was prepared to be outshone by the other two, and this intense rivalry gave their musicmaking a thrilling edge. It was dangerous and explosive and it jangled the nerves. Second, I believe that what still gives the film its power is partly a result of the circumstances in which it was made. It’s easy to forget how primitive recording equipment was in 1968. It had only been a year since I had seen the very first colour video recorder at the BBC, and editing videotape was at best hazardous. So what you see in the film, apart from the interviews, was all ‘live’. There is not a single edit anywhere. You could have seen what you see now immediately after the concert itself, sound and picture. Of course it’s rough; raw would be a better word. It’s often clumsy and just plain wrong. But I think it still has the extraordinary energy of the occasion. Although you would expect me to say this, I don’t think I’ve seen another recording of a concert in which the atmosphere is so exactly as it was on the night. Two footnotes. Eric Clapton later told me that the main reason the group split up was because “the music was not honest.” I’ve always thought it was through sheer exhaustion. In their brief two-and-a-half year existence, Cream played over 300 gigs, travelling night after night here, Europe and in the States. No wonder there was friction. And yes, Ginger Baker often thought Jack deliberately played too loud so that Ginger could not hear himself. During the filming of Beware Mr Baker, Ginger admitted that he had quite frequently wanted to throttle Jack. “But hey,” he told me, “I loved the bastard.” And that was the clue. Jack was held in awe, especially by Ginger and Eric. More importantly, he was also held in enormous affection by those knew him, including me, but especially Ginger and Eric. Second, the film was originally commissioned by the BBC for its ‘Omnibus’ arts slot. In other words, Cream were then thought worthy of consideration alongside Debussy and Picasso. Today the BBC has more-or-less abandoned its archival responsibilities to the arts and mistaken laddism and silly women in fancy dress for culture. More fool them. And as for ‘Sky Arts’; Remembrance Sunday on the Anniversary of World War One in 2014, for instance, was ‘remembered’ by ‘An Evening with the Bee Gees.’ TONY PALMER

Also included: We’re Going Wrong from All My Loving (1968) plus Layla & Tales of Brave Ulysses from All You Need is Love (1975)