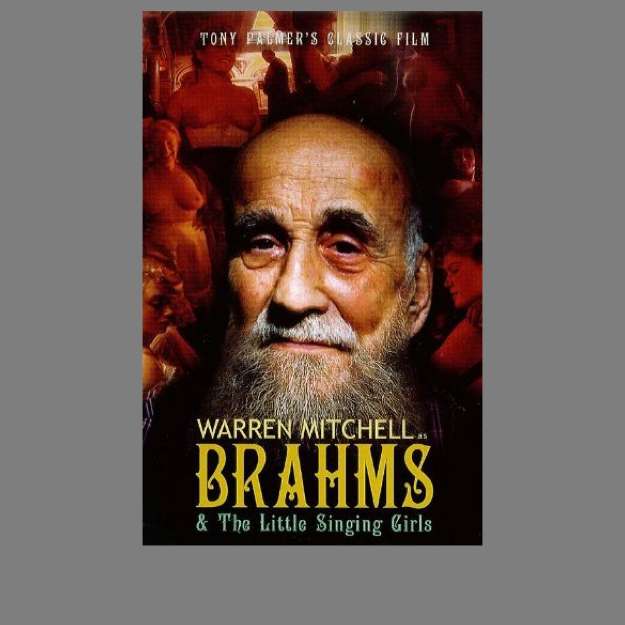 I had long admired Warren Mitchell as an actor. In spite of being crippled to some extent by his most famous creation, Alf Garnett in 'Til Death Us Do Part, brilliant though he was, one always felt instinctively there was an extraordinary actor struggling to get out. And sure enough, when I saw him as Willy Loman in Miller's Death of a Salesman at the National Theatre, I knew (as did everyone else who was lucky enough to see him) that I was in the presence of greatness.

He threw himself into the part of Brahms will enormous gusto. He recognised that this was to be no ‘ordinary' composer portrait, and when the shit hit the fan as the English critics initially rubbished the film, he was its most vigorous advocate, for which I have always been grateful. What had offended more-or-less everyone was the film's affirmation that the familiar image of the stodgy old Brahms was a million miles from the truth. His first musical experience had been playing an upright piano in the brothels of Hamburg where he had grown up and at the end of his life (in fact for the last 15 years) he had lived as a bachelor in Vienna having his every need satisfied by the prostitutes of the city whom he always affectionately described as his ‘little singing girls'. None of this was thought either factually correct or (worse) relevant to his music - which of course is nonsense.

'Palmer at his most ridiculous' was one of the kinder reviews. Of course, the musical establishment was outraged. The Head of Music at the BBC (which of course refused to show the film) was heard to say "the film was disgusting."

Indeed it is, and I am glad it is so because it helped explode the myth of ‘stodgy old (bearded) Brahms' as perpetuated by dreary films such as Song of Love with Robert Walker or Spring Symphony with Nastassja Kinski, or all those turgid, mawkish documentaries about the supposed ‘love affair' between Clara Schumann and Brahms. I've counted three made by the BBC alone. In spite of some success around the world, this film has still never been shown in Britain.

And surprise, surprise, some years after the film was finished, a new biography of Brahms by Jan Swafford, the American composer and musicologist at Boston Conservatory, was published ‘proving' (if that is the word) that everything I had ventured about Brahms's life turned out to be essentially true.

But this film is not about scoring points; rather it is a celebration of unabashed, life-enhancing, sexually explosive music. Warren Mitchell, who was more-or-less the same age as the Brahms he portrays in the film, rose to the challenge with fire in his belly. He loved all the naked girls and who would not? Brahms did, and that's what made him the great composer he is.