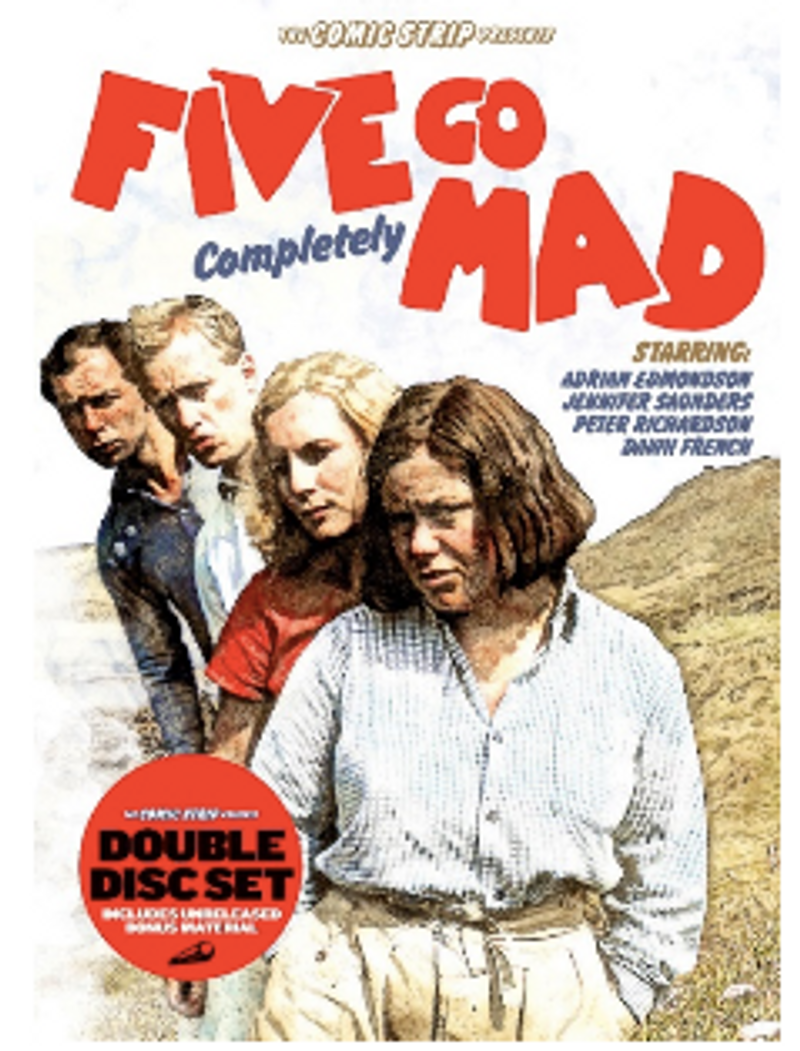 In the summer of 1982, the Comic Strip made their first film FIVE GO MAD IN DORSET - a spoof of Enid Blyton’s Famous Five books enjoyed by millions of children since the 50s.

These stories were exciting adventures about four children and their dog who were allowed to wander off in their school holidays, on their own (with no phone) to an unknown destination and get entangled with unshaven criminals stealing our country’s secrets! In satirising the Famous Five, the Comic Strip bluntly highlighted the sexist and casual racism of the period in a way that’s no longer acceptable on TV. In 1982, with The Black and White Minstrel show barely off the air and Robertson’s Jam still handing out gollywog badges, these attitudes were still prevalent but hardly commented on.  Five Go Mad in Dorset won the Press Award and was welcomed for playing a small part in changing this.

THE STORY  Home for the holidays the Famous Five are given the news that their Uncle Quentin a famous scientist has been kidnapped yet again and as usual their Aunt Fanny can’t wait to get them out the way. So, Julian (PETER RICHARDSON), George (DAWN FRENCH), Dick (ADE EDMONDSON) Anne (JENNIFER SAUNDERS) and their dog Timmy, set off on bikes into deepest Dorset., a landscape of hidden lanes and ruined castles riddled with thieves burying treasure or rendezvousing with suspect light aircraft. And not forgetting the sinister gypsy (ROBBIE COLTRANE) always there ready to scare passers-by! When the Five are not stopping for enormous picnics, they’re at the village shop buying yet more food. Here they meet Toby, a boy with far too much money and clearly lower class. Despite being patronised, Toby wants to be their friend. Begrudgingly the Five allow him to join them for a short while providing he’ll then ‘clear off ‘. However, Toby is kidnapped (for a ransom) and the Five at last have a crime to solve. Going in search of clues they get an unexpected shock. Their famous Uncle Quentin was not kidnapped and nor was Toby!  When finally cornered, Quentin tries to explain that he and Toby are both gay and planning to ‘flee the country that night in a fishing boat ‘...This cuts no ice with the Famous Five  “Homosexuality is still against the law Uncle Quentin and you’re going to jail! Looking even more smug than usual the Five watch proudly as the police arrest their Uncle and Toby and take them away for a long stretch inside. Then remounting their bikes, they head off for another huge picnic and lashings of ginger beer. Hurrah!

From fifties English values to FIVE GO MAD ON MESCALIN, the Famous Five meets 60s flower power head on when gay Uncle Quentin buys his very own Love Island. A beautiful rocky paradise where he can supplement his scientist pension with a bit of drug smuggling. But no, the priggish Famous Five have to go and spoil it all. 30 years on from FIVE GO MAD IN DORSET’s opening on the 1st night of Channel Four the Comic Strip reunite for FIVE GO TO REHAB to see how this self-righteous bunch have fared in later life. Not too good it seems…Julian and George having had a rackety time with failed marriages, bad business deals and lashings of vodka are in rehab to clean themselves up for a planned reunion that Dick has organised and so wants it to be like the old days. Sadly, after their thrilling childhood adventures, Dick’s life has been rather dull, having spent twenty years as the manager a car rental company. Anne, meanwhile, far from being ‘shy and pretty.’ is a radical feminist and vegan who’s not going to take shit from Julian or anybody…and so it begins.