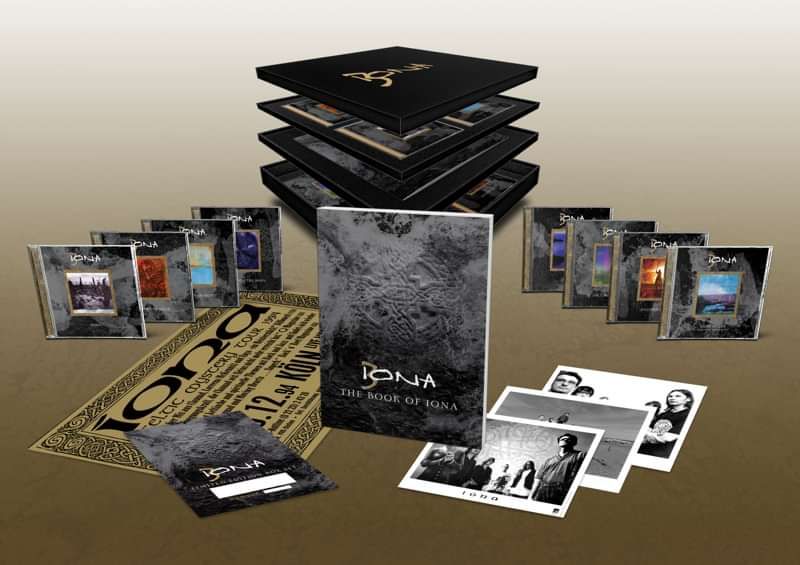 2nd pressing of this amazing 17 disc set, capturing not only all the studio albums from Iona but features almost the same amount of music again on a Companion Disk for each album. These companion discs, which Dave Bainbridge has personally overseen the assembly of are included; rare and unreleased studio recordings, different mixes, unreleased tracks, live recordings from the era the studio album was recorded. Below is the provisional tracklisting to the "companion disks".

In addition to the extra audio content of the box, also included is:

1.Kells Opening Theme, 1.26 Original demo recorded as the idea formed!  2.Revelation 1.23 - early demo 3.Man - Vocal section 1 1.37 demo, wordless vocal 4. Man - Vocal section 2 1.36 demo, wordless vocal 5. Tree of Life 4.05 (which became Mark the Lion)   6. The River Flows 1.49 early demo. Originally called Faithful Heart, the title was changed during the album studio sessions. 7. Faithful Heart (The River Flows) 4.48 (remastered from original 2 track mixtape) 8. Virgin & Child - 3.16 harp only version  9. John the Eagle (originally titled Hill of the Angels) 2.52 - recorded on the Isle of Mull 1991 10. Kells Theme 1.10 - Dave original demo 11. Kells Theme Jig! 1.08 - Dave original demo 12. Eternity 2.19 Kensington Temple heavenly choir with new keyboards 13. Warrior of the Wasteland 3.35   14.Lost Tribe 3.24 - demo  March 1991  15. Harp & Whistle idea 2.37 - demo March 1991  16. Watching You - demo. 17. Sax / Keys Impro 4.04 Before David B and David F were in Iona we toured together with several other artists, especially singer-songwriter Adrian Snell. After soundcheck was finished, they would often jam together and realized there was a very special chemistry when we did this. Several Iona pieces were born out of these improvisations and we carried on with these spontaneous jams during Iona rehearsals and writing sessions. This track is an example of exactly that, recorded on cassette during a get together in September 1990. The original keys part was a little quiet in the mix, so I’ve added a little to it, using synth sounds that were available back in 1990. 18. My Town 4.15  19. Hard Way to Learn 3.42 demo with Frank violin  - recorded on the Isle of Mull. 20.Reilig Orain demo1.46. 21. Whistle & Keys Atmospheric idea 2.49 - recorded on the Isle of Mull 1991

** BEYOND THESE SHORES COMPANION AUDIO DISK Complete running order to be confirmed, but including:**

**JOURNEY INTO THE MORN COMPANION AUDIO DISK Complete running order to be confirmed, but including:

OPEN SKY COMPANION AUDIO DISK Complete running order to be confirmed, but including:

** THE CIRCLING HOUR COMPANION AUDIO DISK Complete running order to be confirmed, but including: ** 1. How Wonderful - original demos 1.53 (delicate version), 2.49 (bolder version). Recorded late ’90’s in Ireland, whilst Jo and Dave were working on ideas for what would become Open Sky. Although it was not used on the Open Sky album, Dave always remembered this demo, especially the version on which Jo, unsure of how the melody would be, was singing very softly and intimately. He returned to it when the band were putting ideas together for the Circling Hour. 2. Spirit of God 3.37 This version recorded and mixed for an edition of BBC's Songs of Praise Almighty Father Who Dost Give 2.37

SNOWDONIA COMPANION DISK Complete running order to be confirmed, but including: