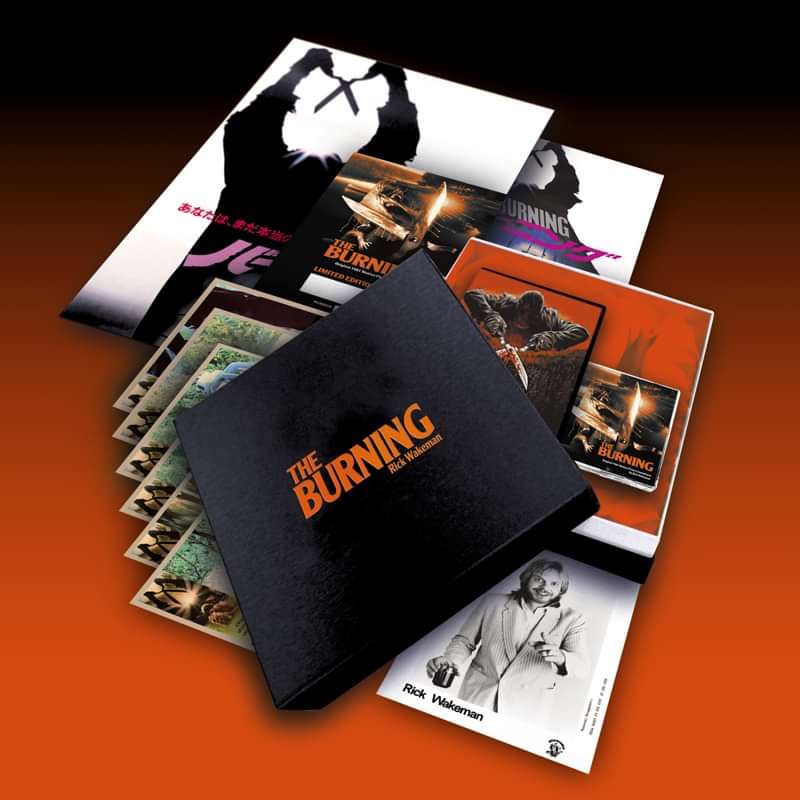 Rick Wakeman’s grandiose early recordings, with full orchestrations, clearly brought him to the attention of film producers over the years. This has resulted in a number of interesting soundtrack albums, both for cinema and TV. “The Burning”, a Bob and Harvey Weinstein produced shock horror movie from 1981, was Rick’s second soundtrack album, recorded in Queens, New York at The Workshoppe Recording studio, primarily with the musical director Alan Brewer on guitar, studio owner and engineer Kevin Kelly on bass and New York drummer Mike Braun.

The soundtrack for the album was a combination of Rick’s own compositions and recordings, with additional contributions from Alan Brewer (credited as Alan Brawer) and Alan’s wife at that time, Anna Pepper. Kevin Kelly explains, “The soundtrack for the movie itself was recorded over several weeks, primarily just by Rick himself playing something like 100 cues. When it came to the soundtrack album, Rick arranged some of the more frequently used cues in a “prog rock” style into the four pieces that are on side A and these were re-recorded specifically for the album by Rick, Alan, Mike and myself.”

The released album was therefore literally an album of two sides, not only in the vinyl sense, but also the music it contained. Side A, tracks 1-4 on the CD, are the arrangements of music from the movie, featuring a host of analogue synths favoured by Rick at the time.

The signature sounds, and strong band ensemble certainly bring to mind Rick’s earlier work ‘The Six Wives of Henry VIII’ and fans of that album will find a lot to like on Side A. Of particular note, alongside the more familiar Hammond and Moog, is the wonderful Prophet 10 synthesizer, the only recording by Rick to feature it.

Rick recalls, “In 1978, Sequential Circuits produced the Prophet 5 keyboard, which was quite revolutionary at the time, being polyphonic. The sounds were “fat” and it was extremely popular amongst keyboard players. Then a few months later they produced the Prophet 10, (version 1), which had all sorts of problems as indeed did version 2, but then in 1980 along came version 3 which was a sensational instrument. My only criticism was that by calling it a Prophet 10, it implied that it was a giant Prophet 5, which is wasn’t. It was definitely an instrument in its own right.” “I needed to rent keyboards for the duration of the recording and although I had not seen or heard the version 3 of the Prophet 10, I hired one in and it became the mainstay of all the recordings. I don’t think there was a part of the soundtrack, or indeed the soundtrack album, where it wasn’t featured.

For some strange reason, I never got hold of one for my own rig or studio, which is something I really need to rectify. There are a few about, but version 3s are hard to find.”

Turning to Side B, this is a mix of shorter pieces that feature in the movie, including the “Campfire Story” about “Cropsy”, the film’s central character. “The Fire” and “Shear Terror” are reminiscent of the old BBC Sound Effects records that were popular at the time. “Doin’ It”, penned by Anna Pepper is an upbeat country rock number that is certainly at odds with the rest of the tracks. And the atmosphere then moves to “full on” country hoe-down, with the Alan Brawer played track “Devil’s Creek Breakdown” – neither of these last two tracks would you expect to hear on an album of Rick’s!

Kevin Kelly recalled one of the techniques they used for the cues that can be heard on Side B. “The director asked Rick to support the acting and editing, meaning that if a scene wasn’t scary enough, to use the music soundtrack to make it scarier. This was of course back in the days of analogue tape and for one specific scene Rick asked me to mark the tape with a click at the exact point where the moonlight glints on the knife blade. Then to place an additional four clicks leading up to that point. Finally adding four clicks after the main one. The tape was then turned over and Rick played a chord and told me to fight the decay by raising the recording level as the sound dropped off to try to keep it constant. He then did the same thing on four more open tracks to layer the sound. The tape was then put back to normal and some clavinet and brass sounds were added after the cue point. So here’s what happened, you had this guy walking through the woods where the director wanted to heighten the suspense and you had these creepy, organic piano sounds building up, not fading down because they were reversed. This build-up of all the piano overtones went on for about a minute, not sounding like piano at all and then at the moment of the glint, the crashing brass sound scared the crap out of you. I’d never seen this technique used anywhere before and it just showed how inventive Rick really was. He used the medium in an insanely creative way!”